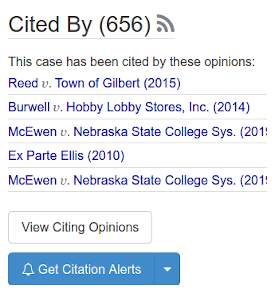 Back in 2016 we mentioned in a blog post that you can set up alerts to learn about new references to opinions in CourtListener. We called it: “Citation Alerts”, but they were a bit difficult to set up. Today we’re announcing that we’ve revamped Citation Alerts so they’re more obvious, easier to create, and easier to modify.

Citation Alerts are a wildly powerful feature that can be used to stay apprised of changes in the law. Basic Citation Alerts will send you an email when there’s a new cite to an opinion you’re following, but you can take them much further.

For example, let’s say you want to follow citations to Citizens United v. FEC. Doing that is really easy. Just open the case on CourtListener and on the left you’ll see a link for creating an alert. Click it and you’re all set.

But that’s only the beginning. Since 2010, Citizens has been cited about 650 times. That translates to more than one email a week. That’s probably too much clutter in your inbox, but you can prevent this by refining your alert. How about only citations from federal circuit courts citing Citizens and also using the phrase “First Amendment”. No problem — Citation Alerts can be combined with any of our regular filters to really dial in the emails you want to receive.

We hope that with these enhancements, Citation Alerts will become a regular part of your workflow. Click below to learn more.