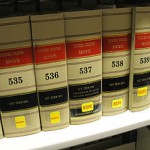 A long time ago in a courthouse not too far away, people started making books of every important decision made by the courts. These books became known as reporters and were generally created by librarian-types of yore such as Mr. William Cranch and Alex Dallas.

These men—-for they were all men—-were busy for the next few centuries and created thousands of these books, culminating in what we know today as West’s reporters or as regional reporters like the “Dakota Reports” or the thoroughly-named, “Synopses of the Decisions of the Supreme Court of Texas Arising from Restraints by Conscript and Other Military Authorities (Robards).”

Motivated by our need to identify citations to these reporters, we’ve taken a stab at aggregating a few facts about them, such as variations in their name, abbreviation, or years they were published, and put all that information into our reporters database. Until recently, this database lived deep inside CourtListener and was only discovered by intrepid hackers rooting around, but a few months ago we pulled it out, put it in its own repository, and converted it to better formats so anyone could more easily re-use it.

Currently, it’s ready to use by any interested party, and it’s at version 1.0.9. The next version, 1.1, is around the corner and all it needs is dates for when reporters start and stop. If you’re a librarian or legal researcher, we’d love to have your help gathering this data so we can disseminate it to the world. To take one example of what can be done with this data, Frank Bennett created the Legal Resource Registry which, when you drill down to a particular court/jurisdiction, e.g., New Mexico’s Supreme Court, will show you all the reporters or citation schemes we know about for that jurisdiction. It’s a really nice visual way to view the data contained in this giant .json file.

We encourage others to take a look at the database, integrate it into their own projects, and expand on the effort.