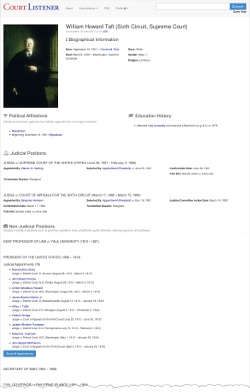 Today we’re extremely proud and excited to be launching a comprehensive database of judges and the judiciary, to be linked to Courtlistener's corpus of legal opinions authored by those judges. We hope that this database, its APIs, and its bulk data will become a valuable tool for attorneys and researchers across the country. This new database has been developed with support from the National Science Foundation and the John S. and James L. Knight Foundation, in conjunction with Elliott Ash of Princeton University and Bentley MacLeod of Columbia University.

At launch, the database has nearly 8,500 judges from federal and state courts, all of which are available via our APIs, in bulk data, and via a new judicial search interface that we've created.

The database is aimed to be comprehensive, including as many facts about as many judges as possible. At the outset, we are collecting the following kinds of information about the judges:

We have collected all available public datasets and added a large amount of data ourselves. But there are many actors in the U.S. legal system and the database is far from complete. We hope that interested researchers will collaborate with us in contributing more data. Our goal is to put down a foundation of solid data that can be built on by the community and that can grow into the future.

In conjunction with this database, we're also launching a project to gather and curate judicial portraits. At launch, we have gathered about 250 judicial portraits, mostly of federal judges. This is a small fraction of the number of judges in the database, and we're looking for help gathering many more portraits. We're hopeful that with community support we'll be able to build a comprehensive database of judicial portraits. If you're interested in helping or have ideas for where we might get more images of judges, please get in touch.

A major concern when creating a database of this scope is the quality of the data. The initial data we're announcing today comes from two major sources.

The data quality is relatively high and we have already corrected some errors in the upstream sources. However this is a work in progress with much data missing. We appreciate any input from the community.

There are a few major gaps in what we're launching today:

If you have good sources of data for any of these gaps or have other data that you think should be included, we'd love to hear from you.

The best way to get started is by reading our documentation.

We've done our best to make this as complete as possible, but we know it's not perfect. If you have corrections to send or want to get involved improving what's here, please get in touch using our contact form. There's a lot to do and we'd be very pleased to hear from you.

[^1]: The main funding source is NSF Grant SES-1260875 ("A study into the effect of employment conditions on judicial behavior and performance"). The data are described in detail in: Elliott Ash and Bentley MacLeod, "Intrinsic motivation in public service: Theory and evidence from state supreme courts," Journal of Law and Economics 58 (November 2015). See also: Elliott Ash and Bentley MacLeod, "The performance of elected officials: Evidence from state supreme courts," NBER Working Paper w22071. Before using this data for academic research, please contact the authors (e@elliottash.com) for further details and for the newest version.