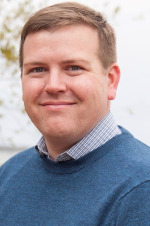 When he's not researching Islamist extremism or uncovering potential terror plots in the United States, Seamus Hughes is using documents available to anyone to break potential news stories, often beating journalists at their own game.

He's become adept at navigating the Public Access to Court Electronic Records, or as it's often referred to, PACER. It's the website that gives the public access to federal court documents filed in every district in the United States, including bankruptcy courts.

For example, at the end of August. Hughes nonchalantly tweeted out a tip about an Arizona man who'd been arrested and charged with threatening to shoot Vice President Mike Pence.

Or there's that time in July, when Hughes helped break the story about the capture of South Korea's most wanted man, Yoo Hyuk-kee, who'd been on the run for over five years after the 2014 sinking of a ferry that killed more than 300 people.

In the past, Hughes worked for the U.S. Senate Homeland Security as a Senior Counterterrorism Advisor and also stood at the helm of the government's efforts to communicate with Muslim families impacted by violent extremism as part of the National Counterterrorism Center.

As the Deputy Director of the Program on Extremism at George Washington University, Hughes has written reports on American Jihadists in Syria and ISIS cells in the United States, to name a few.

"I think there's just a wealth of information in federal court records, whether it be in civil or criminal cases," Hughes says. "Which may not be a standalone story in and of itself. But it can help point you in the right direction."

For academic researchers, lawyers and journalists, PACER is a necessity, providing fast access to federal court documents that help them to stay up-to-date on cases, gather data on trends in the criminal justice system and report on matters of public interest.

Free Law Project is dedicated to increasing transparency in the legal world by improving access to federal court data, and in a way, so is Hughes. Last week, FLP was able to interview Hughes about the media's relationship with PACER, the importance of public access, and the archaic fee schedule currently in place that prevents any attempt at transparency.

Through his work in national security, Hughes has become very familiar with the federal courts system, often using PACER as a starting point when looking into recent acts of terrorism against the US.

For the last two months, Hughes has worked with both the Washington and investigative bureaus of the New York Times, helping break and advance stories. For example, Hughes says, they might be looking for every Chinese espionage case filed in the U.S. in the past five years, only the Department of Justice doesn't list that info on the press release. This is where Hughes comes in.

"They'll usually give me a puzzle and I'll have to figure it out," Hughes says. "But you shouldn't write a story based solely on court records. You have to work the phones and get the context as well."

Navigating the muddy waters of federal court data on PACER can be a confusing, and expensive task for your average journalist, not to mention a member of the public. Each search costs at least 10 cents, and you pay more based on the number of results. If you're not careful, the price can begin to add up, especially if you don't know what you're looking for.

Hughes continues: "And that'll be true for corporations too. Let's say you got the Google beat, you have to figure out who Google's lawyers are and then you can see if some small LLC that has no connection to Google somehow has a Google lawyer on it."

As part of the E-Government Act of 2002, Congress said that PACER couldn't charge any fees more than what they needed for public access, which includes website maintenance. In 2015, PACER brought in about $145 million total. Overall, the fees have brought in over a billion dollars to the federal government.

"So it becomes a question of how broadly you define public access," Hughes says. "But a recent court decision said, ‘no, you can only spend the money on the website,' so I think we'll probably see PACER fees being reduced in the future."

Every year, PACER fees make up about two percent of the federal judiciary's $7 billion budget, according to a class action lawsuit brought by The National Veterans Legal Services Program, and two other nonprofit groups. They sought damages for "systemic overcharging" relating to PACER fees incurred between the years 2010 and 2016.

The lawsuit states that even while the cost of storing data has steadily decreased worldwide, PACER fees have actually increased over the years, with no real justification.

FLP founder Michael Lissner helped provide an analysis of PACER fees that was later submitted as expert testimony in the lawsuit. He was able to show that if PACER were run in the cloud, it'd only cost about half a ten thousandth of a penny per page, as opposed to the 10 cents per page users are currently being charged.

According to the lawsuit, The Administrative Office of the U.S. Courts used PACER fees to fund multiple programs outside of public access, including spending $185 million on courtroom technology, and another $75 million to send notices to creditors in bankruptcy proceedings.

The lawsuit ended up in the Federal Circuit Court of Appeals, where a decision was finally reached last month. As Robert Ambrogi states in the Above the Law blog, the ruling does two things: it works to reaffirm the judiciary's right to charge fees, while also leaving open the option for a reduction in the future.

A goal of FLP is to eliminate PACER fees altogether. As of now, there's a fee waiver system you can follow to argue for the free release of public records in certain scenarios, though it comes with a number of restrictions. Hughes says he's an advocate for eliminating PACER fees, but that it would have to be done in a way that protects people's privacy.

"It's not insignificant to come across a human trafficking case where you have the name of a minor in a criminal complaint, or a social security number popping up," Hughes says. "Or a home address even. I think all of these things are something we can get over, and we can figure out a system to do it better. And there's another positive: more people become accountable."

Aside from the issues of privacy, Hughes largely disagrees with the fee schedule, citing pointless searching fees as one of the biggest culprits.

"I find it ridiculous that you have to pay for the docket activity for the day," Hughes says. "It should be public information to know that these are the cases that are coming up in the docket today. And the fact that I have to pay two dollars times 94 districts every time I do it is criminal."

Eliminating PACER fees would also make it easier to look at widespread patterns and disparities within the federal court system. The data collected could be used for research and academic purposes.

"If you pull up the hood on PACER, you get a sense of how stark sentencing disparities are, depending on cases or how expensive the lawyer is," Hughes says. "If you're just a kid in Chicago caught up on a gun charge, you're probably facing a pretty long sentence. Whereas if you're a kid in Beverly Hills with a high price lawyer, you'll probably end up with a much shorter sentence."

For Hughes, the fees make it harder for the public to access documents that should be available to everyone. This causes people to rely on the press releases and news reports in their local papers, who often can't afford to pay reporters a living wage. These are some ways cases can slide through the cracks and stories end up getting missed.

"Somebody stole $2 million from this school district on the border of Texas and Mexico and nobody knew the guy was arrested," Hughes says. "It's incumbent on us to be able to tell the public what's going on. We can't be relying on the whims of a public information officer for that day."

Even journalists aren't necessarily trained in how to use PACER and disseminate court documents. That's why Hughes has designed a number of workshops and training sessions that he's given to reporters for major media outlets, teaching them how to search PACER to verify leads or find tips.

"We're not just going to wait for things to come to us. We're going to be diggers," Hughes says. "And if I don't know the answer to something I'm going to pick up the phone and call somebody until I get the answer. Mostly because I like a riddle."

Hughes recently co-authored a book, Homegrown: ISIS in America, that looks into the ways the Islamic State was able to recruit from the US, relying heavily on court documents and interviews from past members, giving a first hand account of the unprecedented American involvement in jihadist activity. You can pre-order the book here.