A Complete Chronology of PACER Fees and Policies

Today, the PACER system contains millions of court filings for the federal district, circuit, and bankruptcy courts, most of which are sold at a dime per page with a three dollar cap per document. But content in PACER was not always priced this way, and indeed the PACER system goes back all the way to the early 1990's, before computers were generally connected to the Internet.

Fees for using PACER are set by the Judicial Conference of the Administrative Office of the Courts, which scrupulously keeps notes from its bi-annual proceedings going back to its creation in 1922. In this post, we have gone through all of the relevant proceedings, and we present what we believe is a complete history of PACER fees and changes.

During the 27 year history outlined below, technology has changed significantly, and the Administrative Office of the Courts has done its best to keep up. Over the years, PACER has offered a variety of ways to get court information. These include a 1-900 number, a search service available via a regular phone call, the ability to connect your own computer directly to the courts', and the websites that we know today.

But regardless of the tool, one thing has always been a constant. With few exceptions, fees have consistently played a major part in funding electronic access to court records.

Read on to learn the full history.

The first reference to PACER is in the March, 1990 proceedings of the Judicial Conference, in which fees are set for using, "a personal computer to access a court's computer and extract public data": 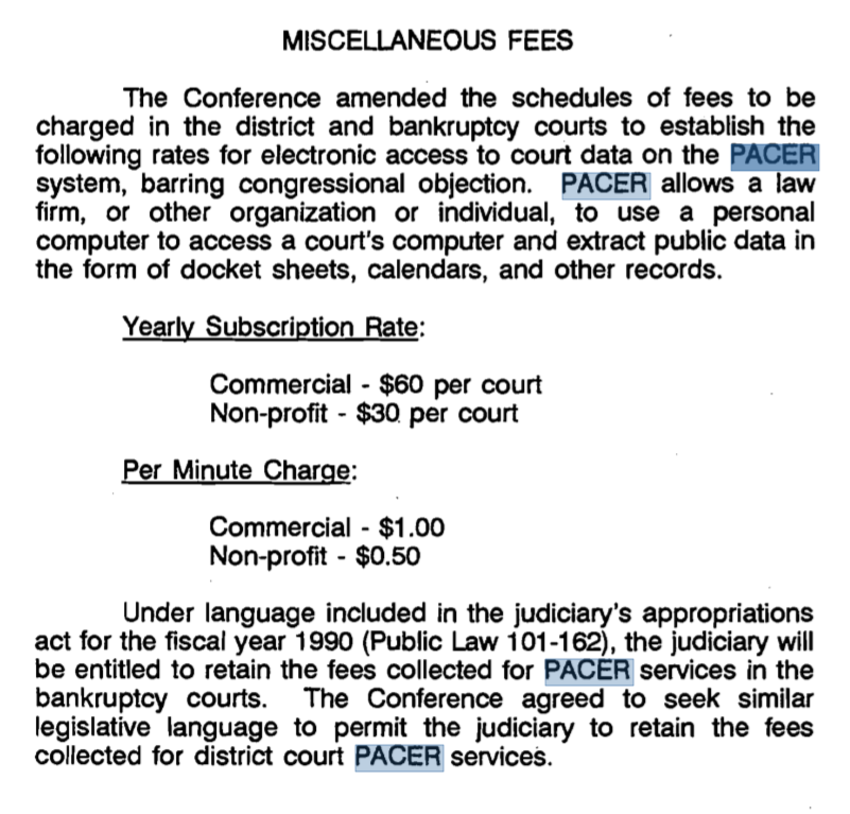 March, 1991 -- The Judicial Conference learns that maintaining PACER accounts is impacting clerks' offices, and a 1-900 number is established at $1/minute. 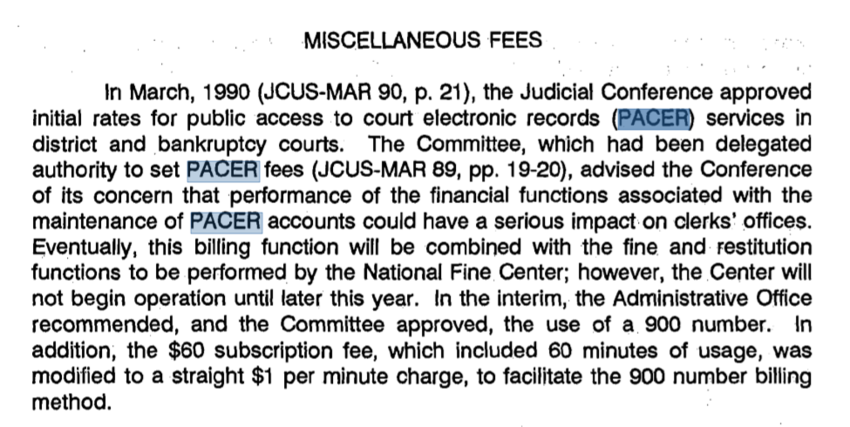 March, 1993 -- Federal agencies no longer get free PACER usage at district, bankruptcy, and appellate courts (except for, "those which receive funding from judiciary appropriations").

September, 1993 -- Although the Judicial Conference believes that fees should be consistent across federal district, bankruptcy, and appeals courts, it is decided not to implement an electronic access fee at the appeals courts due to their use of a different system called "Appellate Court Electronic Services" née "Electronic Dissemination of Opinions System" (EDOS). This decision is reversed a year later.

March, 1994 -- Federal agencies cease getting free electronic access to the Court of Federal Claims. This closes a gap since all other courts already have fees.

September, 1994 -- Electronic access fees are now applied to appellate courts as well. The exemption for federal agencies is clarified.

March, 1995 -- Numerous changes to fees are made. The per minute usage fee is reduced to 75¢ per minute. The policy for fee waivers is clarified. A policy is established that courts should not be reimbursed for electronic access costs accrued outside of the new policy.

March, 1997 -- The fee for mailing labels is repealed given that they are no longer provided by most courts, having been replaced by PACER. 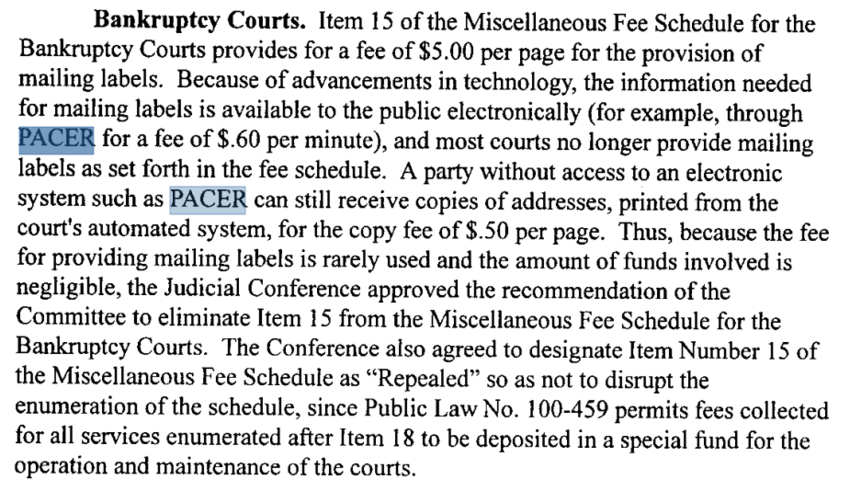 **September, 1998** -- The first modern fee is born with the "introduction of Internet technology to the judiciary's...public access system." The rate is set at 7¢/page. Some types of data are made free, including "opinions designated by the court for publication."

September, 2000 -- The fee schedule is amended to make it clear that it applies to "all case-related documents." 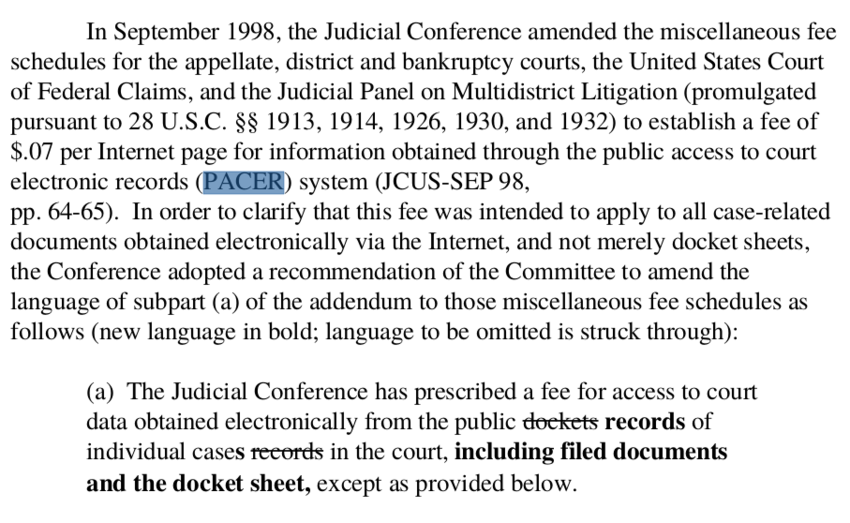 March, 2001 -- Simplification and better centralization of the fee schedules. "One free look" introduced for "attorneys of record and parties in a case." $10/year fee forgiveness is introduced. Reduced fees for printing at public access terminals. New fee of $20 is introduced for PACER Service center staff to perform searches on behalf of people that do not have PACER accounts.

March, 2002 -- A cap is created such that users are only be billed for the first 30 pages of a document. At the time this meant $2.10 maximum per document.

September, 2003 -- Clarifications around fee waivers. 30 page cap introduced in March, 2002 is also applied to docket and case-specific reports, but not to transcripts, since that would result "in a transcript cost that is inconsistent with the current cost of obtaining those transcripts." 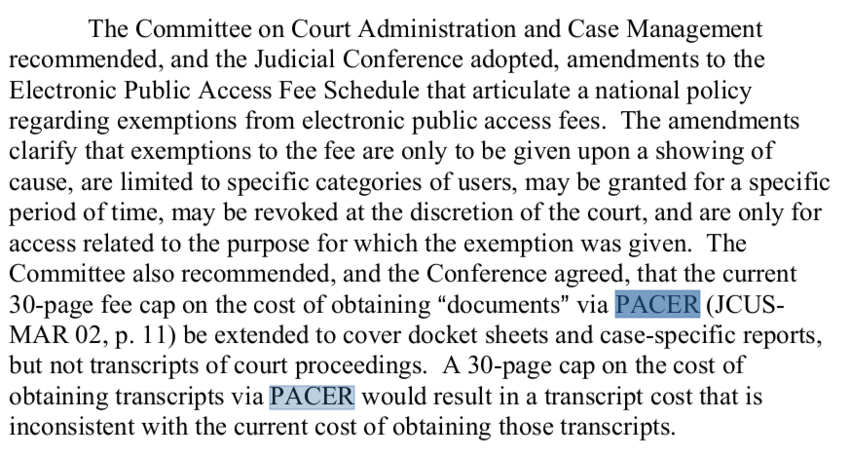 March, 2006 -- New fees for paper reproductions and bounced checks. Search fees performed by PACER staff are now $26, up from $20. 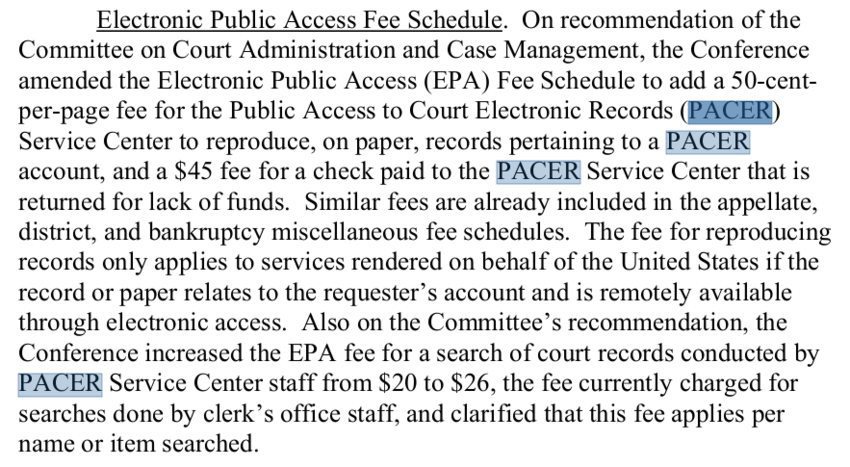 September, 2006 -- Those with fee waivers can no longer redistribute documents at no cost.

March, 2008 -- The fee schedule is amended to remove dial-up fees, "because of expanded accessibility through the internet."

September, 2010 -- A new training program is launched including $50 of free quarterly usage for participating libraries.

September, 2011 -- Current fees are introduced and they have not changed since. Per page fees are increased from 8¢ to 10¢. Quarterly waivers are raised from $10 to $15. These fee increases do not apply for three years to "local, state, and federal and government entities."